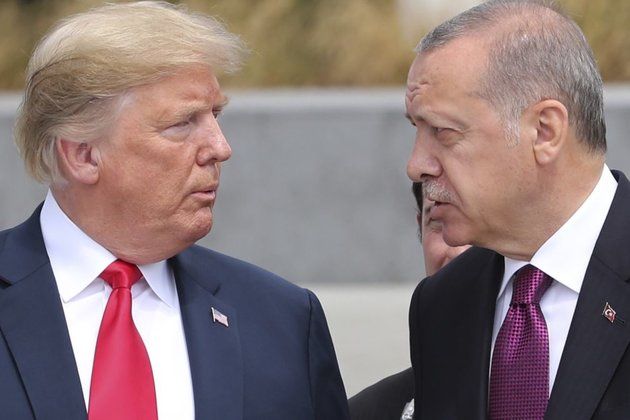 ISTANBUL - With Turkish President Recep Tayyip Erdogan reaffirming his commitment to buy Russian missiles in the face of renewed warnings from NATO ally the United States about sanctions, Ankara and Washington remain on a collision course. Analysts warn that with a July date looming for Ankara to take delivery of the missiles, time is running out to avert a rupture in bilateral ties.

'Turkey must choose does it want to remain a critical partner in the most successful military alliance in history?' said David Satterfield, the U.S. nominee to be the ambassador to Turkey, speaking at a confirmation hearing Thursday before the U.S. Senate Foreign Relations Committee. 'Or does it want to risk the security of that partnership by making such reckless decisions that undermine our alliance?'

'We tell them [journalists], 'This is a job done, all is ready,' ' said Erdogan. He confirmed the purchase of the S-400 missiles as he spoke to Turkish reporters Monday, while returning from Moscow after his third meeting this year with Russian President Vladimir Putin.

'It's like a slow-motion car crash. It's even difficult now to call Turkey and the U.S. allies, so I am not very optimistic about the relationship,' said former senior Turkish diplomat Aydin Selcen, who served in Washington.

Washington claims the S-400 missiles will compromise U.S.-made military defense systems used by Turkey, in particular the F-35 fighter jet. The Pentagon has warned that delivery of the F-35 planes to Turkey, which is a co-producer of the aircraft, is in jeopardy with any deployment of the Russian missiles.

The U.S. Congress is also warning that Ankara's procurement of Russian weapons would open the door to financial sanctions, under CAATSA the Countering American Adversaries Through Sanctions Act. Under the 2017 legislation, Turkish institutions and individuals can be targeted by hefty fines.

Any U.S. fine could rock Turkey's economy, which is in recession after last year's collapse of the lira, triggered by the Trump administration's decision to impose sanctions on Turkey over the detention in Turkey of American pastor Andrew Brunson, who has since been released.

'I don't think market participants have a very good handle on how high the stakes are,' said analyst Atilla Yesilada of Global Source Partners, 'in the bad-case scenario of Turkey-U.S. brinkmanship in the S-400 drama.'

On Friday, the lira fell sharply amid growing investor concerns about U.S.-Turkish tensions and reports of a steep fall in Turkey's foreign currency reserves. 'I fear Erdogan has not been told by his advisers how little foreign reserves Turkey has left,' said an analyst for a foreign bank, speaking anonymously. 'Turkey has very little room and time to maneuver now.'

Some analysts suggest Turkey is too important for the U.S. to crack down on. 'I was speaking to American diplomats. I told them, 'It's America's choice do they want to hit Turkey with sanctions that will make an unstable Turkey, that will destabilize the rest of the region?' ' asked international relations professor Huseyin Bagci, of Ankara's Middle East Technical University.

Bagci says a lack of clarity by Washington about its intentions exacerbates the current tensions.

'The Americans are confused. What we hear from the American Pentagon, the State Department, is it [the S-400 sale] will create troubles and reduce trust and cause sanctions. But the American president has said nothing,' said Bagci.

'If [U.S. President Donald] Trump says don't buy [the S-400 missiles],' he added, 'it will carry much more political weight. However, as long as there is no statement from the American president, there will probably be no return from this deal.'

The Turkish president's advisers routinely maintain that the only voice that counts in Washington is that of Trump. They allege dark forces are operating around the U.S. president, seeking to sour ties with Ankara.

Analysts warn that any strategy by Ankara of relying on Erdogan's relationship with Trump is risky. 'There is a danger for Ankara in miscalculating U.S. intentions,' said Selcen. 'But the [U.S.] intentions are there, clearly stated, it is also true, Trump did not come out publicly on these issues.'

Berat Albayrak, Turkey's economy czar and Erdogan's son-in-law, is due in Washington in the coming days for a series of meetings and conferences. According to Turkish media reports, Albayrak is expected to meet high-level U.S. officials including Jared Kushner, Trump's son-in-law and senior adviser. The two men reportedly have developed a close working relationship.

'It remains to be seen whether those parties at the Pentagon [and] White House will use this visit by Mr. Albayrak as a last measure to convey once again America's message on these issues concerning Turkey's national security,' said Selcen. 'But time is ticking, and we're in the middle of April, and the S-400 is due to be delivered to Turkey in July. So there is not much time.'

Some analysts warn that Washington has already run out of time. 'The S-400s will be delivered; the question is not delivery,' said Bagci. 'But the question is: Is it going to be used? It could be deployed to Turkish Cyprus, so it's not in Turkey. In Turkey, every home has a guest room. So the S-400 could be like a vase in the guest room, not unused.'

NEW YORK, New York - U.S. stocks were on the defensive on Wednesday as profit-takers took advantage of the lofty ...

DUBLIN, Ireland - Irish whiskey and Irish cream have been given a boost by their special designation by one of ...

QUEZON CITY, Philippines, Nov. 25 (PIA) - The Department of Energy (DOE) is preparing for a low carbon scenario as ...

Microsoft to increase Dublin workforce to 2,700

DUBLIN, Ireland - Microsoft Ireland is to create 200 engineering roles to strengthen its existing Dublin-based team of over 600 ...

As authorities in Iraq continue to operate "in the eye of multiple storms", international support remains essential for resolving ongoing ...

WASHINGTON, DC - The General Services Administration has ascertained that President-elect Joe Biden is the "apparent winner" of the November ...

Microsoft to increase Dublin workforce to 2,700

DUBLIN, Ireland - Microsoft Ireland is to create 200 engineering roles to strengthen its existing Dublin-based team of over 600 ...

Trump-appointed head of VOA has authority dashed by court judgement

The chief executive overseeing the Voice of America and its sister networks has acted unconstitutionally in investigating what he claimed ...