CWC'19: Players to watch out in B'desh-SL clash 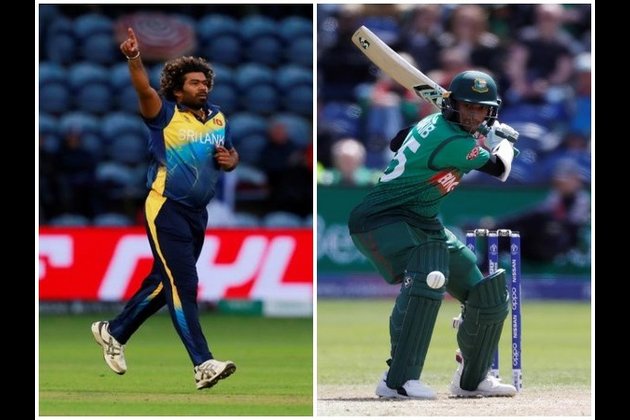 New Delhi [India], Jun 10 (ANI): Bangladesh and Sri Lanka, both with one win each under their belt, would aim to dominate the other when they lock horns in the ICC Men's Cricket World Cup on June 11 at County Ground in Bristol.

Sri Lanka have lifted the trophy once -- 1996 World Cup. The team since then twice finished as runners-up in 2007 and 2011 edition, respectively. On the other hand, Bangladesh are yet to win a title. The team has never entered the semi-finals in the history of the tournament.

Bangladesh won its opening World Cup match, leaving South Africa in a shock. However, Bangladesh then lost its next two fixtures to New Zealand and England, respectively. They have two points from three matches. Sri Lanka lost its first match to the Kiwis but bounced back and defeated Afghanistan in its second match. In its third fixture against Pakistan, the match got abandoned. The team has three points from as many games.

The left-handed batsman has been in an exceptional form for Bangladesh. He along Tamim Iqbal provides the team with a solid and quickfire start. The 26-year-old has become a lynchpin of the team and Bangladesh's hopes rely on him. Sarkar scored 42 runs off just 30 balls in the first World Cup match against South Africa. He contributed with run-a-ball 25 in the second game but remained unsuccessful in the third match as he was dismissed cheaply for two.

One of the best pacers in the world, the 35-year-old Malinga is the master of the slow ball, which makes him a go-to wicket-taker. During 2019 IPL final, the Sri Lankan unleashed the delivery on the last ball which helped Mumbai Indians secure a one-run victory over Chennai Super Kings. Malinga has so far collected 11 wickets, including a three-for against New Zealand, earlier this year. After being unsuccessful against New Zealand in first World Cup match, Malinga picked three-wickets against Afghanistan in the second game. Playing in his last World Cup, Malinga will be the crucial player for Sri Lanka.

Senior Bangladesh cricketer Shakib moved to the top in the ICC ODI rankings for all-rounders last month. The 32-year-old performed well during the tri-nation series against Ireland and West Indies. Shakib amassed 140 runs, including two unbeaten fifties. He scored 75 runs off 84 balls to help Bangladesh to post their highest ever ODI total of 330 runs against South Africa in the first World Cup match. In the next match, he scored 64 against the Kiwis and scalped two wickets which gave Bangladesh a fighting chance in the match. He scored 121 against England in the third game.

Karunaratne, who did not play a single ODI since the last World Cup, found himself leading Sri Lanka in the marquee event. He displayed a promising inning against South Africa in a World Cup warm-up fixture. He scored 87, which saw 12 boundaries. Karunaratne hit an unbeaten 52 against New Zealand in the first match and contributed 30 runs in the second game against Afghanistan. Under a lot of pressure and the ragtag attached to Sri Lanka, Karunaratne has to take his team back to its winning days. (ANI)

UK to spend hundreds of millions of pounds on border infrastructure

Peace and Order programs get P9.3M budget in Tacurong City

TACURONG CITY, Sultan Kudarat, July 13 (PIA) - Making sure that peace and order programs do not take a back ...

Tech stocks were going strong even before Covid-19, but behavioral shifts during the pandemic have lifted the sector further into ...

Jail time for man who ripped off thousands of U.S. troops and veterans

SAN ANTONIO, Texas - A man who hacked into the U.S. military's databases and stole personal information relating to thousands ...

Humanitarian aid to continue after UNSC pact on access points

NEW YORK, New York - Sanity prevailed on Saturday as last minute efforts to stitch up a renewal of the ...

MIAMI, Florida - U.S. President Donald Trump went to Florida on Friday for a briefing on what he said has ...

GENEVA, Switzerland - Lebanon, faced with an economy in upheaval, mass protests, and the crippling effects of the coronavirus is ...

The British Armed Forces led their nation in saying farewell to the Forces' Sweetheart with a series of ceremonial tributes ...

SEOUL, South Korea - North Korea says the chances are low for another summit with the United States, after President ...