Among the Messi's and Ronaldo's, there will be only one Maradona 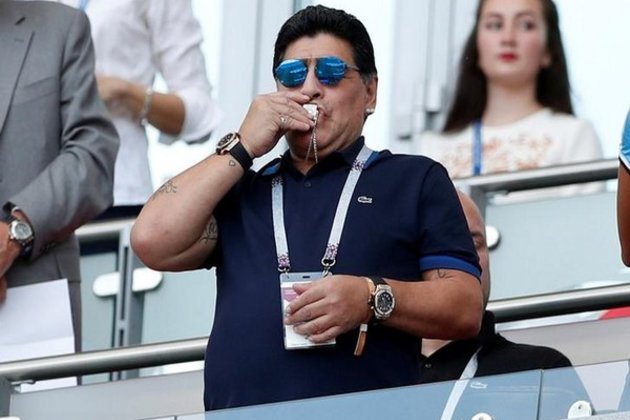 New Delhi [India], November 25 (ANI): The debate on who between Pele and Diego Maradona was the better player didn't make sense to many who grew up in the 80s and 90s because the magician from Brazil last played in October 1977.

Interestingly, even FIFA seemed to fail in this matter as the Player of the Century award was handed jointly to Pele and Maradona in 2000. No wonder then that football lost not just one of its favourite son on Wednesday as Maradona passed away, but also the reason why millions across the globe took to the game in the early 80s and 90s when television was making inroads into homes world over.

Even as people today talk about who between Lionel Messi and Cristiano Ronaldo is the Greatest of All Times (GOAT), there is no denying the fact that there will only be one Maradona. If not for him, the world of football would have undoubtedly been poorer. Not many can boast of the kind of fan following that Maradona enjoyed despite the controversies that engulfed his career, be it the famous 'Hand of God' goal or the numerous drug-related cases. But then, that is what made him more than extraordinary, a true legend.

Maradona passed away on Wednesday after suffering a heart attack. He had been hospitalised at the start of November, days after celebrating his birthday, Goal.com reported.

Maradona was hospitalised after he complained of regularly being fatigued. His tests at the La Plata clinic revealed a blood clot in Maradona's brain, which doctors later revealed was operated on successfully.As per Goal.com, Maradona was also released from the hospital, but in the early hours of Wednesday,Maradona suffered cardiac arrest, and paramedics at the scene failed to revive him.

The reason why he is regarded as the greatest player of all time is that he had many accolades to his name but the most decorated one is that he single-handedly led his country to the FIFA World Cup title in 1986.In his international career with Argentina, he earned 91 caps and scored 34 goals. Maradona played in four FIFA World Cups, including the 1986 World Cup in Mexico where he captained Argentina and led them to victory over West Germany in the final, and won the Golden Ball as the tournament's best player.

In the 1986 World Cup quarter-final, he scored both goals in a 2-1 victory over England that entered football history for two different reasons. The first goal was an unpenalised handling foul known as the "Hand of God", while the second goal followed a 60 m (66 yd) dribble past five England players, voted "Goal of the Century" by FIFA.com voters in 2002.

Maradona's vision, passing, ball control and unmatched dribbling skills always allowed him to manoeuvre better than most other football players.

He had the ability to dribble past multiple opposing players on a run. His presence and leadership on the field had a great effect on his team's general performance, while he would often be singled out by the opposition.

In addition to his creative abilities, he also possessed an eye for goal and was known to be a free kick specialist. A precocious talent, Maradona was given the nickname "El Pibe de Oro" ("The Golden Boy"), a name that stuck with him throughout his careerMaradona had begun his professional career with Argentinos Juniors at the age of 16 and he went on to become one of the greatest players to ever play the game of football. The ace footballer represented Boca Juniors, Barcelona, Napoli, Sevilla, and Newell's Old Boys as a player.

Maradona became the coach of Argentina in November 2008. He was in charge of the team at the 2010 World Cup in South Africa before leaving at the end of the tournament.

He also coached various clubs including Dubai-based club Al Wasl, Fujairah, Dorados and the most recent one was Argentine Primera Division club Gimnasia de La Plata from September 2019 until his death. (ANI)