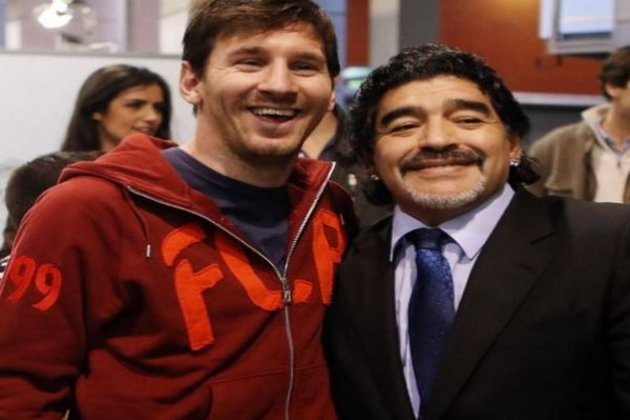 Messi also said that Maradona's demise is a sad day for the entire sports fraternity. Many fans of Messi have been saying that he is as good as Maradona, but the current Barcelona striker has been quoted saying that Maradona will always be his idol.

"A very sad day for all Argentines and for football. He leaves us but does not go away, because Diego is eternal. I keep all the beautiful moments lived with him and I wanted to take the opportunity to send my condolences to all his family and friends. RIP," Messi wrote on Instagram.

Maradona passed away on Wednesday of a heart attack at the age of 60.

The 60-year-old Maradona had been hospitalised at the start of November, days after celebrating his birthday, Goal.com reported.

The pair of Messi and Maradona had teamed up between 2008 and 2010 as the latter managed Argentina's national team.

Not many people know but the duo have also played together during a charity match in Argentina in 2005 when Messi was just 18 and Maradona was 45.

Maradona was hospitalised as he complained of regularly being fatigued. His tests at the La Plata clinic revealed a blood clot in Maradona's brain, which doctors later revealed was operated on successfully.

As per a report in Goal.com, Maradona was also released from the hospital, but in the early hours of Wednesday, Maradona suffered cardiac arrest, and paramedics at the scene failed to revive him.

Maradona had begun his professional career with Argentinos Juniors at the age of 16 and he went on to become one of the greatest players to ever play the game of football.

He represented Boca Juniors, Barcelona, Napoli, Sevilla, and Newell's Old Boys as a player. Diego was considered the main player in taking Argentina to their second World Cup title in 1986.