LeBron James labeled LeSnitch after getting fans kicked out of game 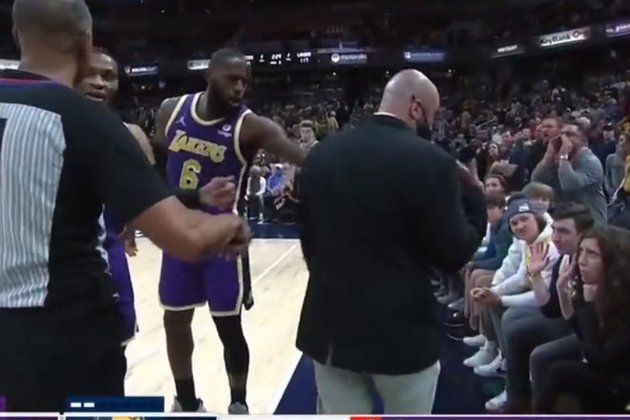 LeBron James enjoyed an eventful return to action as the LA Lakers star recorded a season-high points tally against the Indiana Pacers while ordering two fans to be ejected from their courtside seats.

Returning from a first-ever career suspension for his clash with Isaiah Stewart, James was dominant as he racked up 39 points in the Lakers' 124-116 overtime win against the Pacers at Gainbridge Fieldhouse on Wednesday night.

But James' scoring exploits weren't the only the thing which made the headlines. With 2:29 remaining in overtime, an angry James called referee Rodney Mott over the sidelines and pointed out two fans in the font row.

Officials then went over to the pair and after a brief discussion they were escorted from their seats.

The male member of the duo initially held up his hands before both fans got to their feet and made their way from courtside. As she did so, the woman pouted and rubbed her eyes in a mock crying gesture.

James didn't elaborate on the details on the incident afterwards but said the fans' actions were "outside the line with obscene gestures and words."

"When obscene gestures and language come into it, (it) can't be tolerated," James added.

"There's a difference from cheering for your team and not wanting the other team to win and things I would never say to a fan and they shouldn't say to me."

Online, basketball fans had mixed feelings about the episode. Some dubbed James 'LeSnitch' as the term began trending on Twitter.

However, others said the full details still weren't known and that the fans may well have crossed the line with their remarks.

The incident failed to take too much shine off James' performance as the Lakers improved to 10-10 with their victory.