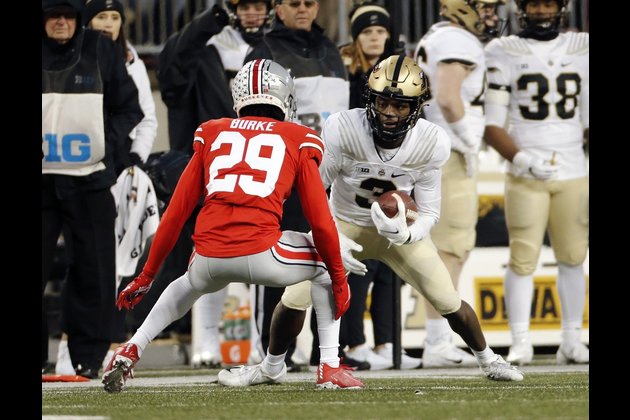 Last year's game was canceled due to COVID-19 issues involving both in-state rivals. Purdue leads the all-time series 74-42-6, though Indiana has won five of the past seven meetings. Indiana currently holds the bucket after beating Purdue 44-41 in double overtime in 2019.

Purdue (7-4, 5-3 Big Ten) will be going for its first eight-win season since 2007. Behind starting quarterback Aidan O'Connell, who has passed for 2,899 yards with 19 TDs and eight interceptions on the season, Purdue's pass offense ranks seventh in the nation at 345.9 yards per game.

"It's rivalry week, and in order for us to have a chance to win the game, we've got to prepare well," Purdue coach Jeff Brohm said. "We've got to get as many guys healthy as we can and go out there and execute on Saturday. I think in these type of games, ... all three elements, offense, defense and special teams, have to be clicking."

The Hoosiers have been beset by injuries all year but are hoping to get preseason All-America cornerback Tiawan Mullen and starting running back Stephen Carr back for the Purdue game. Carr has been out since sustaining an ankle injury on Nov. 6 against Michigan, while Mullen has appeared just once since September while dealing with leg injuries.

"The Old Oaken Bucket week for our program and a huge game for all of our players, our fans, our university and for our state," Indiana coach Tom Allen said. "That is going to be the focus of everything that we do this week and getting our guys ready, guys that have been out, trying to get as many of those guys back as we can."

The Hoosiers could turn to their fourth starting quarterback of the season, walk-on Grant Gremel, after Donaven McCulley dropped to 0-4 as a starter during Indiana's 35-14 loss to Minnesota last week. Gremel passed for 60 yards and his first career TD in relief of McCulley against the Golden Gophers.

"We'll see as the week plays on," Allen said. "We'll see who is healthy, who is also able to go. He's obviously going to get a lot of reps. I liked what I saw on Saturday, for sure."