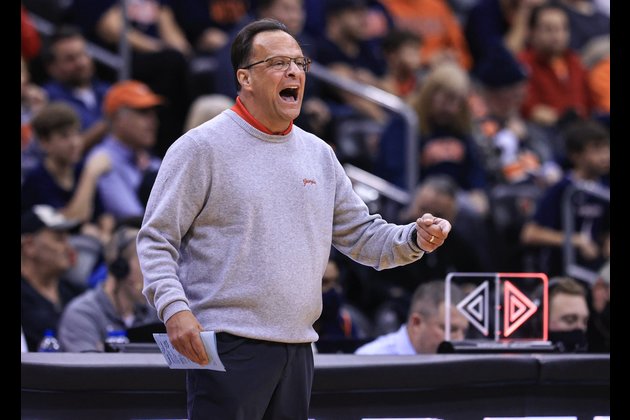 Georgia coach Tom Crean will take his fourth stab at notching his 400th career victory when the Bulldogs host the Wofford Terriers in a nonconference game on Sunday in Athens, Ga.

The Bulldogs (2-4) are coming off a 78-62 loss to Northwestern in the third-place game of the Romans Legends Classicon Tuesday night in Newark, N.J. The defeat followed a 65-55 setback to Virginia in the event's opener and extended the Bulldogs' losing streak to three games. Georgia lost to Georgia Tech 88-78 on Nov. 19.

Aaron Cook leads Georgia with 7.5 assists and 1.3 steals per game to go along with a 12.3 scoring average that's second behind Braelen Bridges' 13.8. Jailyn Ingram averages 10.2 points and a team-high 7.0 rebounds per game.

Wofford (4-2) is coming off an 85-74 loss at South Carolina on Tuesday that snapped the Terriers' three-game winning streak. The Terriers tied the game at 50 on Morgan Safford's 3-pointer with 14:45 remaining, but South Carolina went on a 10-0 run and never looked back.

"In crucial segments, it felt like we were just pressed and trying a little too hard to make the home run plays instead of embracing pressure, letting them get all jumpy, play off two feet, do what we do and knock those shots down," Wofford coach Jay McAuley said. "As those shots continued to not go down, the rim got a little smaller, and that affected our connectivity on the defensive end."