Raptors face Celtics hoping a return home is the answer 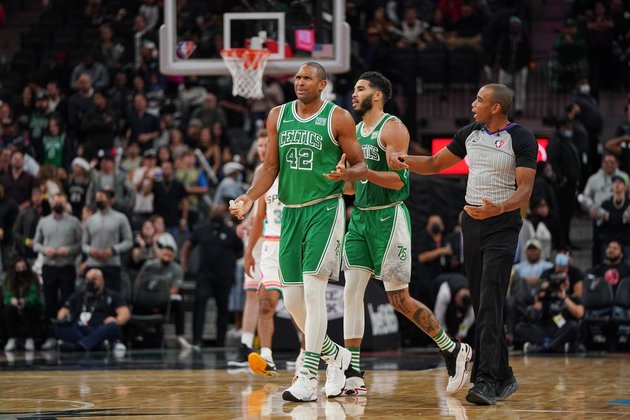 After a 2-4 road trip, the Toronto Raptors will play their next seven games at home starting Sunday against the Boston Celtics.

The Raptors completed their six-game trip with a 114-97 loss to the Indiana Pacers on Friday night. So far, home court has not been an advantage for the Raptors either with a 2-6 mark.

They will meet a Boston team that has plenty of its own problems. On Friday, they blew a seven-point lead with three minutes remaining against the San Antonio Spurs, who finished the game on a 15-0 run to end a six-game losing streak with a 96-88 victory.

The Celtics had overcome a 24-point deficit to gain the lead.

"Across the board, you look at us at halftime and the numbers were ugly," Boston coach Ime Udoka said. "We talked offensively playing with more pace, playing together, not trying to do it by yourself. The second half was a different story. Just can't dig yourself that hole."

Toronto could have OG Anunoby (hip pointer) back for Sunday. He has missed five consecutive games.

"I thought he'd make it back at some point during (the) road trip, but it hasn't quite materialized that way," Nurse said. "I'm hoping it's any day now."

The Raptors also were without Khem Birch (knee) for the final two games of the trip. Yuta Watanabe (calf), who made his season debut in the win over the Memphis Grizzlies on Wednesday, did not play Friday as part of his recovery.

Moreover, Gary Trent Jr. experienced tightness in his calf on Friday and tried to play with it but left for the locker room late in the game after scoring 13 points.

The Celtics were without Robert Williams and Josh Richardson on Friday because of non-COVID illnesses. Richardson could play Sunday but Williams is not expected to be available.

The Celtics will be trying to overcome their tendency to start slowly. They trailed 30-14 after the first quarter on Friday.

"I feel like, at times, we are trying to get ourselves going and not coming ready to play," Udoka said. "We shouldn't have to take two or three shots to get us in a rhythm or get us going. Come out and play the way we do in the second, third and fourth quarter from the start.

"Guys are trying to find their rhythm instead of playing together and that's what it looks like to me in the first quarter at times. Everybody is worried about their game and getting themselves going instead of what's best for the team and playing together."

The teams have split two games this season, both in Boston.