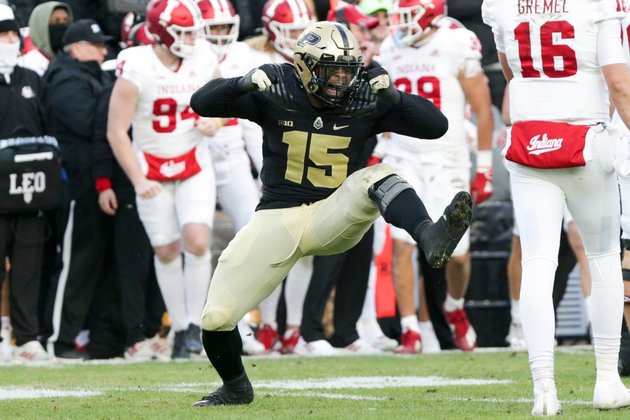 Aidan O'Connell completed 26 of 31 passes for 278 yards and four touchdowns, lifting Purdue to a 44-7 win over rival Indiana in Big Ten play at West Lafayette, Ind.

The Boilermakers (8-4, 6-3 Big Ten) took back the Old Oaken Bucket for the first time since 2018 behind the passing of O'Connell, who was on point all afternoon. With the win, Purdue achieved its first eight-win season since 2007. Running back Zander Horvath added 15 carries for 49 yards and one touchdown for Purdue.

Indiana (2-10, 0-9), which began the year as No. 17, finished the season with eight straight losses and posted its first winless Big Ten season since 2011. Walk-on Grant Gremel made his first career start at quarterback for Indiana, completing 18 of 30 passes for 147 yards and one interception.

Purdue took the game's opening kickoff and drove 75 yards on 13 plays, going up 7-0 on a 1-yard TD run by Horvath. O'Connell completed 6 of 7 passes for 56 yards on the drive. Indiana answered with an 11-play, 75-yard drive, capped by a 2-yard scoring run by quarterback Donaven McCulley, to tie the score at 7.

In the second quarter, after a Jaylin Williams 77-yard interception return for a TD for Indiana was wiped out on a pass interference penalty, O'Connell found tight end Paul Piferi on an 18-yard TD pass to put the Boilermakers up 14-7.

Purdue extended its lead to 17-7 on a 32-yard field goal from kicker Mitchell Fineran. Indiana had a chance to cut into Purdue's lead late in the half, but Charles Campbell's 40-yard field-goal attempt with two seconds left in the half sailed wide left, allowing the Boilermakers to take a 10-point lead into halftime.

In the third quarter, O'Connell remained hot, completing all four of his pass attempts on a four-play, 51-yard TD drive. O'Connell finished the drive with a 21-yard TD pass to Jackson Anthrop, putting the Boilermakers up 24-7.