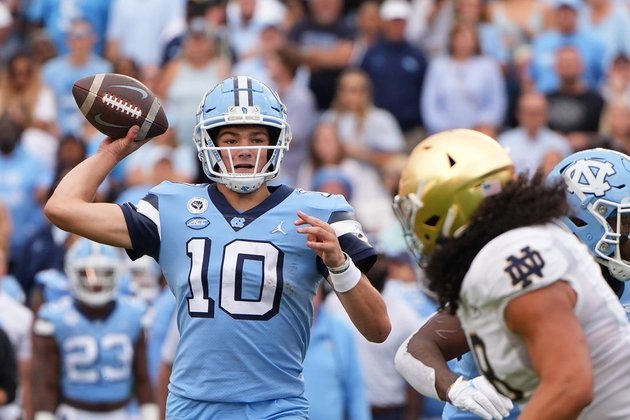 North Carolina (4-1) scored on seven of its first nine possessions, bouncing back from a loss to Notre Dame a week earlier.

Quarterback Grant Wells of the Hokies was 16 of 26 for 139 yards with an interception.

It was North Carolina's largest margin of victory against the Hokies since the Gator Bowl to end the 1997 season.

North Carolina receiver Josh Downs was without a touchdown, but he made eight catches for 120 yards. The Tar Heels keep it clean as they were flagged for just four penalties.

North Carolina went ahead later in the first quarter on Maye's 3-yard pass to Kamari Morales on a fourth-and-goal play, marking the second fourth-down conversion of the 75-yard drive.

Maye ran for a 1-yard touchdown run to cap the first possession of the second quarter, a drive that covered 85 yards and used 11 plays. That drive involved a fourth-and-7 pickup.

North Carolina's third touchdown came on its first play of a possession when Maye hooked up with Antoine Green for 16 yards. It came after Cedric Gray's interception.

The Hokies got it together for a 14-play, 69-yard drive that ended with Wells going into the end zone from 2 yards out.

But the Tar Heels struck back to make it 24-10 at halftime on Noah Burnette's 44-yard field goal.