Nebraska runs away from Indiana in fourth, 35-21 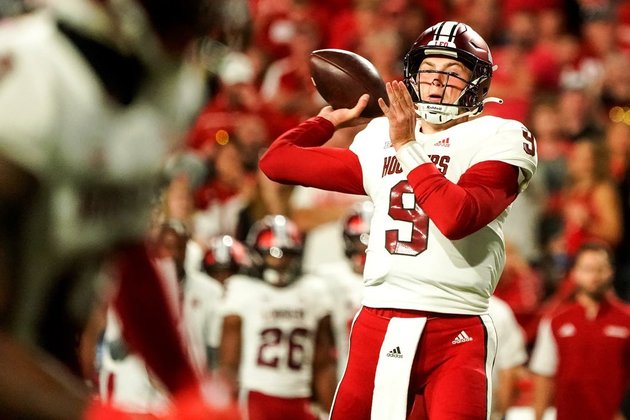 The Cornhuskers (2-3, 1-1 Big Ten) got their first win under interim coach Mickey Joseph. They bounced back from getting blown out by Oklahoma two weeks ago by surviving 12 penalties for 111 yards. Nebraska also scored on its first blocked punt since 2009 while taking a 21-7 lead in the second quarter.

Palmer helped Nebraska recover from blowing a 14-point lead in the first half. He streaked down the middle of the field on a third-and-9 and easily blew past Indiana defensive back Phillip Dunnam for a 28-21 lead.

Palmer also caught a six-yard pass that set up quarterback Thompson's 1-yard TD run for a 35-21 lead with 6:53 remaining.

Thompson completed 18 of 27 passes for 270 yards and two TDs, including a 34-yard score to Oliver Martin less than two minutes in.

Anthony Grant rushed for 136 yards on 32 carries for his fourth 100-yard game this season as Nebraska totaled 385 yards.

Connor Bazelak completed 22 of 44 passes for 223 yards but Indiana converted just two of 15 third downs and gained 67 yards on the ground.

Indiana tied the game when Miles Jackson recovered a fumble by backup quarterback Chubba Purdy in the end zone with 12:17 left in the first half.

Nebraska regained the lead with 10:03 left in the second when Chris Kolarevic blocked a punt and Malcolm Hartzog returned it 30 yards for the score. The Cornhuskers went up 21-7 a little over four minutes later on Jaquez Yant's 1-yard run.

Indiana cut the deficit to 21-14 with 3:09 remaining when Emery Simmons caught a 13-yard pass in the back of the end zone. Indiana then tied the game in the final minute on a 1-yard TD by Shaun Shivers.