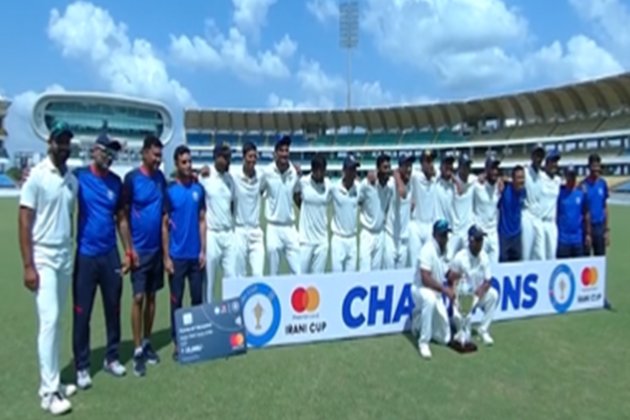 Rajkot (Gujarat) [India], October 4 (ANI): Sarfaraz Khan continued his otherworldly run of form with a brilliant century and spells from pacers Kuldeep Sen and Mukesh Kumar helped the Rest of India defeat Saurashtra by eight wickets in Rajkot to clinch the Irani Cup on Tuesday.

The Rest of India side has captured its 25th title by defeating Saurashtra, the winner of 2019-20 Ranji Trophy. Saurashtra was bowled out for just 98 runs in the first innings. ROI replied with a powerful 374 in their first innings, which gave them the lead of 276 runs in the match. Saurashtra was bundled out for 380 in their second innings. They gained a lead of 104 runs, translating into a 105-run target for ROI, which was chased down comfortably.

Chasing 105, Jaydev Unadkat's impressive pace bowling dismissed Priyank Panchal for just 2. ROI was 14/1 at this point. Unadkat trapped Yash Dhull next, for just eight runs to restrict his opponent to 24/2.

Then, Abhimanyu Easwaran, who was out for duck in previous innings, joined forces with Srikar Bharat. The duo stitched an 81-run stand to guide ROI to a victory by eight wickets. Easwaran scored 63 off 78 balls with nine fours, while Bharat scored an unbeaten 27 off 82 balls and kept one end steady.

Unadkat's 2/37 went in vain as Saurashtra failed to win the trophy.

Earlier in their second innings, Saurashtra was bundled out for 380. Sheldon Jackson (71), Arpit Vasavada (55), Prerak Mankad (72) and Unadkat (89) revived Saurashtra's chances in the match after their first five batters were dismissed within a space of just 87 runs. A 114-run eighth-wicket stand between Unadkat and Mankad was a key highlight of the innings.

Pacer Kuldeep Sen's fifer (5/94) destroyed Saurashtra's top order and also did not let it score bigger once they got a bit of momentum and some partnerships under their belt. Saurabh Kumar (3/80), Mukesh Kumar (1/49) and Jayant Yadav (1/72) also delivered notable contributions with the ball.

Saurashtra had a 104-run lead over the Rest of India, who were bundled out for 374 in their first innings. Sarfaraz's 138 and captain Hanuma Vihari's 82 were the top two contributions from ROI batters and it helped them gain a 276-run lead over Saurashtra. Saurabh Kumar also scored a valuable 55.

For Saurashtra, fifer from Chetan Sakariya (5/93) was the most important bowling contribution. Chirag Jani (2/58) and Unadkar (2/100) also bowled well.

After being put to bat first by ROI, Saurashtra was bowled out for just 98 runs in their first innings. Only Arpit Vasavada (22) and Dharmendrasinh Jadeja (28) could cross the 20-run mark. Only three batters could touch two-digit scores.

The pace trio of Mukesh Kumar (4/23), Umran Malik (3/25) and Kuldeep Sen (3/41) was proved to be extremely potent against a skillful Saurashtra line up.

Mukesh Kumar earned the 'Man of the Match' award for his match figures of 5/72. (ANI)