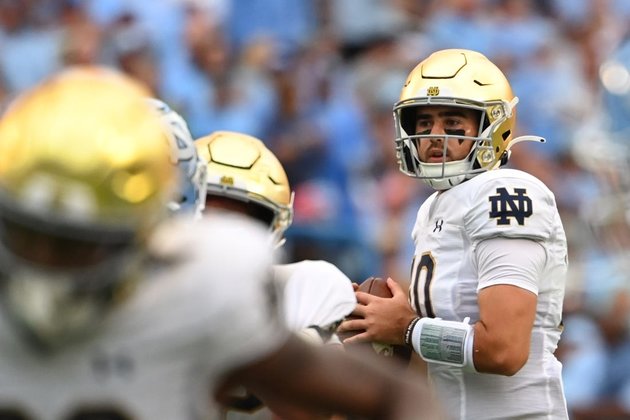 Notre Dame is riding a two-game winning streak into Saturday's clash with No. 16 BYU at Las Vegas for one simple reason: The Fighting Irish have been focused on playing more complete games.

The commitment has helped Notre Dame rebound from a 0-2 start where it lost leads against Ohio State and Marshall in back-to-back weeks and sent the Irish tumbling out of the AP Top 25 poll after starting the season as a top-10 squad.

The Irish (2-2) put together their most complete game offensively two weeks ago in a 45-32 win over North Carolina. They racked up 576 yards and averaged 6.8 yards per play against the Tar Heels after being held under 400 total yards in each of their first three contests. Defensively, Notre Dame held North Carolina to just 66 rushing yards.

"I wanted to make sure our focus is on every play of the game and not just finishing in the fourth," Notre Dame coach Marcus Freeman said.

Playing a more complete game is also a concern for BYU.

The Cougars (4-1) needed third-quarter surges to overcome sluggish starts in back-to-back wins over Wyoming and Utah State. Against Utah State in particular, BYU ran only 19 plays in the first half compared to 52 for the Aggies.

Once the Cougars started sustaining drives, they were able to pull away. In the third quarter of an eventual 38-26 victory over Utah State, BYU ran 22 plays and averaged 9 yards per play.

Starting strong has become a greater emphasis going into the game at the home of the Las Vegas Raiders.

"That's the whole focus is us playing at our best and that's my job as head coach is to make sure we get there," BYU coach Kalani Sitake said.

Saturday's game is the 11th edition of Notre Dame's Shamrock Series, which started with a 2009 contest against Washington State. Notre Dame has never lost a Shamrock Series game, which functions as a de facto home game designed to bring Irish football games to alumni and fans in other parts of the country.

"The Shamrock Series is what makes Notre Dame unique," Freeman said. "It's one of our distinctions."

BYU and Notre Dame are meeting for the ninth time. The Irish hold a 6-2 lead in the series. The contest also culminates a six-game contract between the schools, originally signed when the Cougars became an FBS independent in 2011. Two games were played at South Bend, Ind., in 2012 and 2013 - both Notre Dame victories. The Irish bought out three of the final four games after forming a scheduling alliance with the ACC.

The Cougars enter the game as a slight underdog by oddsmakers despite facing an unranked Notre Dame squad.

"I like the underdog mentality all the time, so no matter what the situation is, we know we are going against a great team," Sitake said. "Notre Dame hasn't played its best football yet, but you can see the talent and the flashes of great players. But we haven't played our best football either."