Race Thompson paces No. 11 Indiana in win over Little Rock 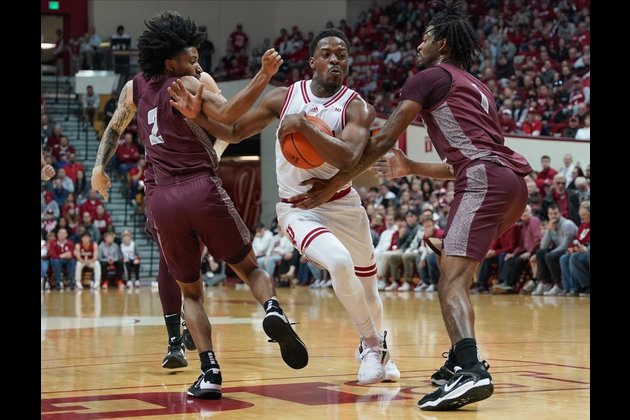 Race Thompson returned from a minor injury and scored 20 points and had eight rebounds to lead the No. 11 Indiana Hoosiers to an 87-68 win Wednesday over the Little Rock Trojans in the Hoosier Classic in Bloomington, Ind.

The Hoosiers (5-0) used a 10-point run in the second half to break open a 64-57 game against the pesky Trojans and create the necessary separation to keep their record spotless.

They hit nine of their last 10 shots on the way to the victory.

The Hoosiers played without star Trayce Jackson-Davis, who was held out for precautionary reasons and was on the bench in civilian clothes. The 6-foot-9 senior forward is averaging 20.8 points on 75.6 percent field-goal shooting with 8.8 rebounds per game.

The team was also without Trey Galloway for the second consecutive game. The 6-foot-4 guard was injured in a win over Xavier on Friday.

Reneau helped the home side jump out to a 10-2 inside the first four minutes, scoring six points including a steal and breakaway dunk at 16:06.

However, injuries continued to mount for Indiana. Reneau went off before the first half's midpoint after a hard fall. Thompson later left for the sidelines as well, bloodied on the head after taking an inadvertent elbow underneath the basket.

Hood-Schifino sank a jumper and 3-pointer in helping the Hoosiers to a 37-22 lead. But Smith hit a pair of 3s and Gordon sparked an 8-0 run as the Hoosiers led 39-30 at halftime.

The Trojans started off hot in the second half, outscoring the Hoosiers 10-7 to cut the deficit to 46-40 at the media timeout.