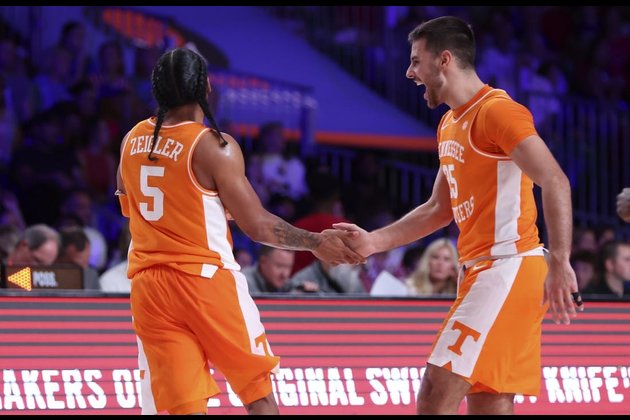 Caleb Grill scored a game-high 31 points and Iowa State knocked off No. 1 North Carolina 70-65 at the Phil Knight Invitational on Friday in Portland, Ore.

Santiago Vescovi scored 20 points with six rebounds and Zakai Zeigler added 14 points as the Volunteers went wire-to-wire to win the title of the Battle 4 Atlantis event with a victory over the Jayhawks at Paradise Island, Bahamas.

The Volunteers' defense made its presence felt, holding the Jayhawks to 32.1 percent shooting from the field, while forcing 16 turnovers. Tyreke Key scored 10 points for Tennessee (5-1), which outrebounded Kansas 45-27.

Jalen Wilson and Joseph Yesufu each scored 14 points for the defending national champion Jayhawks (6-1), who not only lost for the first time this season, but they saw their 17-game winning streak come to an end.

Jayden Gardner scored a season-high 26 points in the Cavaliers' wire-to-wire 72-45 victory against the Hawks in Charlottesville, Va.

Zach Edey scored 23 points and grabbed seven rebounds as the Boilermakers defeated the Bulldogs in the semifinals of the Phil Knight Legacy tournament in Portland, Ore.

Purdue (5-0) will meet No. 8 Duke in the championship game Sunday afternoon, while Gonzaga (4-2) will face Xavier for third place.

Jeremy Roach scored 21 points and hit key shots in the second half as the Blue Devils fended off the Musketeers in a semifinal game of the Phil Knight Legacy tournament at Portland, Ore.

Mark Mitchell added 16 points and Kyle Filipowski had 12 while the freshman pair combined on nine rebounds to send the Blue Devils to the tournament final Sunday. Duke (6-1) shot 50 percent from the field after failing to hit at a 30 percent clip a day earlier.

Tamar Bates scored a career-high 22 points and had four assists as the Hoosiers remained perfect by defeating the Tigers in Bloomington, Ind.

The Hoosiers (6-0) gained control of the matchup early, pulling away from the Tigers (0-5) and closing the half with a commanding 16-point advantage fueled by breakaway buckets. Bates, who averaged 3.9 points per game in his first season with Indiana, was 8 of 11 from the field. His four 3-pointers on six tries were also a career best.

Xavier Johnson had 16 points on 6-of-11 shooting, including 4-for-8 from long range, for Indiana. Trace Young had 13 points and six rebounds while Ken Evans had 10 points and nine boards for Jackson State.

Joey Hauser scored 18 points with 10 rebounds, Tyson Walker also had 18 points as the Spartans rallied to beat the Ducks.

Pierre Brooks added 15 points for the Spartans, who rebounded from an 81-70 defeat to Alabama on Thursday. The Spartans trailed by as many as eight points in the first half. Michigan State advanced to Sunday's consolation championship game against Portland.

Will Richardson scored 28 points and Kel'el Ware added 17 with nine rebounds for the injury-plagued Ducks, who lost their third consecutive game, all to ranked teams. N'Faly Dante exited early and entered concussion protocol.

Skyy Clark and RJ Melendez combined for 36 points on 15-of-20 shooting on Friday as the Fighting Illini rolled over the Lions in Champaign, Ill.

Keenon Cole scored 20 points on 8-of-11 shooting and Kevin Caldwell Jr. had 10 points to lead Lindenwood (3-5), which is in its first season as a Division I program. The Lions also committed 22 turnovers, missed 13 of their 18 3-point attempts and were outrebounded 38-22.

Adama Sanogo scored a game-high 25 points and the Huskies used a 21-2 run late in the second half to stop the Crimson Tide in the semifinals of the Phil Knight Invitational in Portland, Ore.

Jordan Hawkins added 16 for UConn (7-0), which forced 21 turnovers and turned those into 23 points. The Huskies also nailed 21 of 24 free throws, including 17 of 18 after halftime.

Freshman Brandon Miller scored 18 points and grabbed nine rebounds for Alabama (5-1) but made only 5 of 15 shots. Jaden Bradley added 12 points in a reserve role, but it wasn't nearly enough.

Julian Reese scored a career-high 24 points and added 10 rebounds to lead three Terrapins who finished in double figures in the Terrapins' victory over the visiting Eagles in College Park, Md.

Reese scored all but two of his points in the first half, finished the game 10 of 12 from the floor and went 4 of 7 from the line. Hakim Hart added 22 points and eight rebounds. Jahmir Young finished with 21 points, five assists and five rebounds, and Donta Scott chipped in nine points and six rebounds for the Terrapins (6-0).

Patrick McCaffery scored a team-high 21 points as No. 25 Iowa held off a furious rally by Clemson to win 74-71 on Friday night in the semifinals of the Emerald Coast Classic in Niceville, Fla.

Iowa (5-0) moves on to the championship game on Saturday against TCU, which beat Cal 59-48 later Friday night. Clemson (4-2) will face the Golden Bears in a consolation matchup.

Tony Perkins, who went 6-for-6 at the foul line in the last 20 seconds, finished with 11 points for the Hawkeyes. Kris Murray added 10 points and grabbed a game-high 12 rebounds. The Tigers got 21 points and six assists from Chase Hunter and 13 points from Hunter Tyson.

As prices of EVs fall, manufacturer Rivian to reduce workforce by 6%

IRVINE, California: In an effort to cut costs in preparation for an industry-wide price war, electric vehicle manufacturer Rivian Automotive, ...

SANTA CLARA, California: One week after Intel forecasted lower-than-expected sales caused by a loss of market share to rivals and ...

WASHINGTON D.C.: As part of a wider policy drive to increase competition in consumer markets, President Joe Biden has announced ...

OSLO, Norway: Ending a three-year run of profits as stock and bond prices were hit by rising inflation and Russia's ...

US concerned over rights at Mexico auto factory, seeks corrections

WASHINGTON D.C.: The US has again asked Mexico to investigate claims that workers at an auto parts facility of American ...

US ending Covid emergency programs on May 11

WASHINGTON D.C.: The Biden administration said this week that it will end US COVID-19 emergency declarations on 11th May, nearly ...

After 11,000 US flights disrupted, FAA updates its computers

WASHINGTON D.C.: In a letter to lawmakers last week, the US Federal Aviation Administration (FAA) said it had put in ...

WASHINGTON D.C.: The Biden administration has stopped issuing export licenses to US companies seeking to ship most items to China's ...

Nearly a year in, the war in Ukraine has cost tens of thousands of lives and brought the world to ...

After Biden tapped US oil reserves, House passes bill to end such uses

WASHINGTON D.C.: The US House of Representatives has passed a bill that limits the ability of US Energy Secretary Jennifer ...